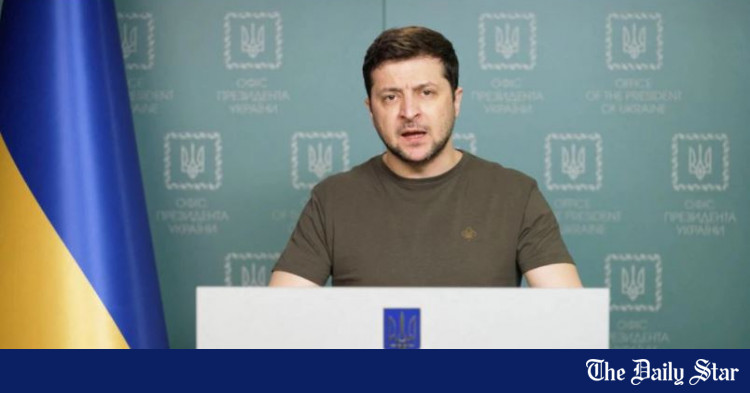 The use of chemical warfare, a real threat: Zelensky

Ukrainian President Volodymyr Zelensky said on Thursday there was a “real” threat that Moscow would use chemical weapons in Ukraine, accusing Russia of having previously used phosphorus bombs against civilians in the country.

“The threat of Russia’s large-scale use of chemical weapons on the territory of Ukraine is real,” Zelensky told a G7 summit in Brussels via video conference, adding that Kyiv has information. that Russian troops were “using phosphorus bombs against peaceful people in Ukraine”. .

For all the latest news, follow the Daily Star’s Google News channel.

The Ukrainian leader called for a “total embargo” on trade relations with Russia and to prevent Russia from using the GPS navigation system “in times of war”.

Zelensky said Russian banks should be “completely cut off from the global financial system” and frozen Russian assets “should be used for reparations to rebuild Ukraine.”

Zelensky also warned that the war in Ukraine could lead to a “global food crisis”.

“The longer there is no peace on Ukrainian territory, the less Ukrainian food the world market will receive,” he said.

He said the war could lead to “commodity” shortages in “many countries in Asia, Africa and even Europe”.

Ukraine is one of the largest exporters of agricultural products, especially wheat and corn.

Russian President Vladimir Putin launched his shock invasion of Ukraine a month ago.