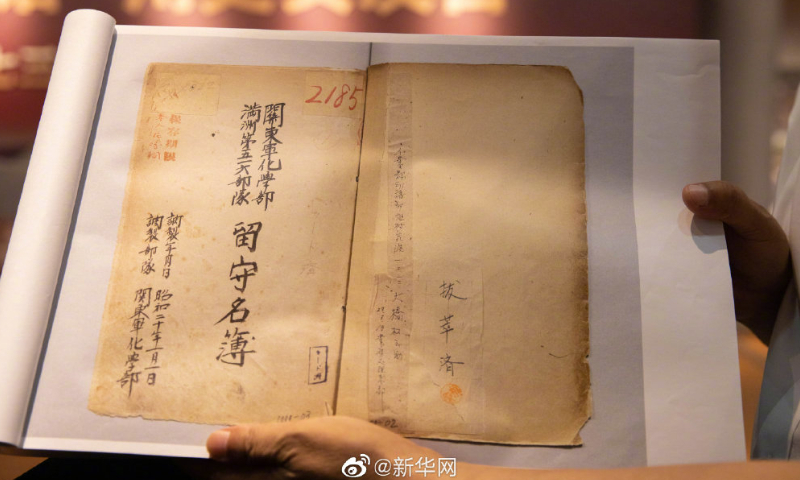 The complete list of names and personal information of all 414 members of the Japanese Kwantung Army Chemical Department, also known as Unit 516, which researched and developed deadly chemical weapons during World War II ( WWII), were made public in China for the first time. hour on Monday, serving as important new historical evidence for the study of the history of chemical warfare in Japan.

Monday marks the 77th anniversary of Japan’s defeat and unconditional surrender in World War II. The Imperial Japanese Army’s Unit 731 Crime Evidence Exhibition Room in Harbin, northeast China’s Heilongjiang Province has leaked the recorded information of all 414 members of Unit 516 which the Japanese Army first set up in Qiqihar, Heilongjiang on May 11, 1939.

Unit 516 mainly focused on the research and development of a series of toxic substances, including highly erosive mustard gas, fast erosive lewisite, asphyxiating chlorine acid gas and the application of these toxic chemicals in real fights.

According to Jin Chengmin, curator of the exhibition hall, the registration book was completed around 1945. A total of 237 pages were compiled containing the names of 414 members, dates of birth, household records, types services, the services arm, as well as their parents’ residences and their relationships, which can reveal basic historical facts, including the entire scale of Unit 516 and the composition of the personnel and their ranks.

According to Jin, the total number of members of Unit 516 is not 250 as originally claimed, but 414, which is attainable so far. Its main members were high-ranking officers and its professionals came from medical schools and military hospitals.

According to Jin, this record book serves as an essential base record for research on chemical and biological warfare carried out by Japan during World War II, as well as hard evidence of crimes committed by the chemical department of the army. of Kwantung during his invasion of China.

The registration book was originally stored at the Japanese Ministry of Health, Labor and Welfare and was transferred to and preserved by the National Archives of Japan’s digital archives in 2017.

It was discovered by the Imperial Japanese Army Unit 731 crime evidence showroom research team in the process of collecting transnational evidence in Japan, and finally obtained in April 2021 after multiple efforts.

Besides Unit 731, the Kwantung Army’s Epidemic Prevention and Water Purification Department as the unit’s official name, and Unit 516, there was another Japanese unit that committed many crimes, unit 100, whose official name was the military animal epidemic prevention department in Changchun, but its actual research and development were biological weapons and even anatomy experiments on living human beings.

At an event exposing germ warfare crimes carried out by the Japanese military recently held in Kanagawa Prefecture in Yokohama City, Japan, Takashi Ogawa, a former professor at Nippon Veterinary and Life Science University, said that Unit 100 primarily researched and cultivated bacteria that humans and livestock could transmit to each other, such as anthrax, and conducted the dispersal experiment, according to media reports.

According to Ogawa, Unit 100 flew planes low to spread bacteria to livestock, and many sheep and cows died during the experiments. The crimes of Unit 100 were not as well known to the world as those of Unit 731 under the guise of military and equestrian epidemic prevention and were covered up by Japanese right-wing forces after the war. However, their crimes cannot be hidden forever as the evidence is overwhelming, Ogawa said.

2022-08-15
Previous Post: Emergency solar management in WA: what you need to know
Next Post: Weather modification: what is it and is it legal?